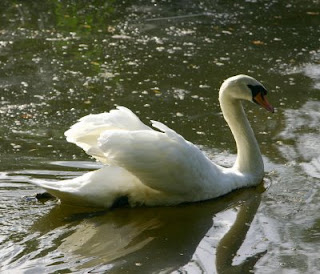 Not many weeks ago I posted a piece about a horse that had been killed on the road outside my house. Today, yet again, I find myself in tears over the death of another animal or, to be more accurate, a bird.

Last week I'd noticed that one of the adults from the resident swan family on our local lake was missing. Only one parent plus the seven cygnets were about. This struck me as odd because they are a devoted family and always together, but I thought maybe the male adult had gone for a little cruise around the other lakes in the area, leaving the female with the youngsters. But as the days went by I began to think this wasn't the case and maybe something had happened.

And then today I read in our local paper that the female had been knocked down by a car driving alongside the lake and left there, dying, with her family grouped around her.

Mute Swans, some of which have been known to live for up to 20 years, mate for life, and these well-established pairs have the most success in raising their young. There is no evidence that upon the death of one of the pair the surviving swan will pine away and it is possible that it will find an alternative mate. But I find it so tragic that, after all these years and after having successfully brought up all those youngsters, this needless slaughter should have happened.

The road past the lake is little more than a track which runs for about a mile and a half between two parallel main roads. For much of its length it is unpaved and deeply rutted, winding between farm fields and a farmyard before it meets the other road. People walk their dogs along it and take their children down it to look at the lake and the wildlife. It's the sort of road that you drive along at about 15 miles an hour tops and if you meet someone coming the other way someone has to back up. So what sort of speed was this person who killed the swan doing?

I hate writing blogs like this. And I so hope it's the last blog of its kind.
Posted by Angie Willis at 16:38