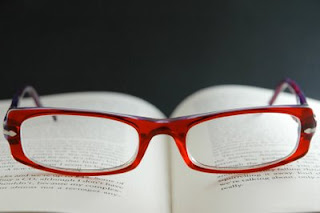 You would think, wouldn't you, that buying a pair of specs would be the easiest thing in the world. The amount of choice available in most large opticians is massive - every shape, colour, style you can imagine. I thought, 'Hmm - I'll just pop in and choose a couple of frames and get them made up to my prescription - shouldn't take more than half an hour.'

Half a day more like! By the time an assistant came over to me I had about eight pairs I liked clutched in one hand, another three stuck in the neck of my T-shirt and was trying on a twelfth.

'Can I help you, madam?' She glanced with barely disguised horror at all these expensive frames (I assumed they were expensive - I don't like tat!) hanging off different parts of me.

She led me over to the back of the shop where she offloaded the frames onto the relative safety of a table and sat me down. Then she unclipped the security tags from all twelve pairs so I could try them on properly. After trying them all on at least twice, some of them more, I settled on my favourite couple of frames and she called up my prescription on the computer.

'Oh dear,' she said. 'You can't have either of those with your prescription. This one,' and she pointed to a beautiful fuchsia pink beauty with a thin, oblong frame and slightly blingy arms, 'is far two shallow. Your varifocal requirement won't suit that at all. And this one,' an electric blue half-frame with arms that faded from blue to purple, 'won't do either. You need a full frame for your prescription.'

'So which of all these would work for me?' I asked her, pointing to the rejected pile of ten frames and thinking I would have to settle for second best.

But no, none of them were any good. They were either too shallow, too narrow, not enough frame etc. etc.

So back we went to the rows of frames to start over. We looked at Prada, RayBan, Oakley, Dior, Armani, D&G... We even looked at some cheap ones! And nothing, absolutely nothing I liked would work with my prescription.

By this time there was a fairly healthy queue forming at the reception desk and most of the rest of the staff had gone off on their lunch break. My assistant's voice had gone up an octave or two - definitely the first signs of panic setting in.

So we turned to the problem of the lenses. Should I have extra thin lenses? Aspheric? High index? Glass or plastic? Arghhhhhh - my head was spinning from all these options. All I want is some colourful, blingy specs so I can ditch my contact lenses before the bags under my eyes get big enough to hold the entire English Channel because they're being pulled around so much.

What on earth is a Chaffinch to do?
Posted by Angie Willis at 14:44