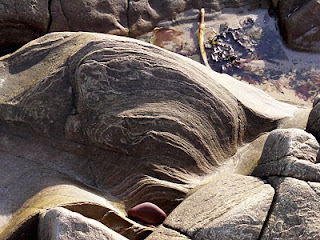 This is a photograph I took last year on a beach in Scotland. I love the patterns in the rock formations and the subtle differences in the colours.

It was a sunny day and there was a deep shadow on the left of the photograph which obscured some of the beauty of the rock forms. I adjusted it in Photoshop Elements and I think it looks OK now. I'm a rank amateur as far as taking photographs is concerned so I'm always worried that I haven't got it quite right.

I also find it difficult working on the laptop because if I alter the angle of the screen it alters the colours and contrast in the image. I guess the only way to really find out if it's right is to print it out properly on decent photo paper. But since this is most likely to only ever be viewed on a computer screen the problem remains.

I've been taking lots of photos recently because I have a new camera, a Sony NEX-5. I have two lenses for it - a 16mm pancake lens and an 18-55 zoom. The only other one they make for the camera is an 18-200 zoom, although there is a convertor which makes the whole range of Sony a lenses plus some Minolta lenses available. I'm thinking about Christmas and need to have a plan of action ready in case someone decides to give me a lens!! I shall have to do some research...
Posted by Angie Willis at 16:52