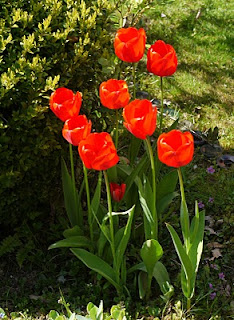 Wow - spring has come on us like a galloping horse after the dreadful March weather. My tulips are out in the garden - opening their heads for the daytime and closing up again at night. Tulips are my favourite flower but I wouldn't think of cutting any of them to put indoors - I buy those from the flower shop! 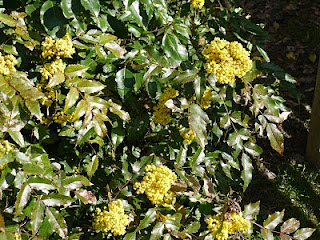 I can't think what this is called but it has the glossiest evergreen leaves and at this time of year a riot of huge clumps of tiny yellow flowers. It spreads at will and I let it because I love it. Once I tried to dig some of it out but soon gave up because the leaves are very spikey! 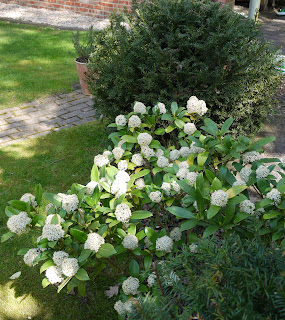 This little shrub has a mate which is a male which I think it pollenates it. It has never looked so good as it does this year - really healthy and happy. 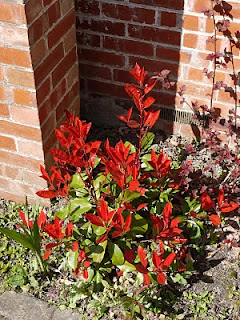 I only put this shrub in last year. It lives close to the house in a rather dry border which is slightly tucked under the eaves so it doesn't get too much rain. It seems to like it though! It has a friend nearby which I put in at the same time (you can just see it against the wall) but that one hasn't got its full summer clothing on yet so one for another post 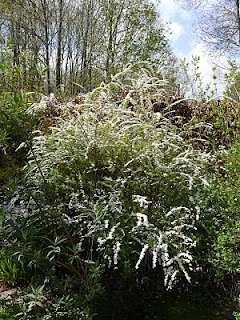 This shrub has been in for quite a few years now - it dates from the time I planted several shrubs all of which had white flowers or berries. Since then various other colours have crept in but this is the first one to flower. The brown behind it is the beech hedge which has only just started to turn green in a few places.
Posted by Angie Willis at 17:47

Email ThisBlogThis!Share to TwitterShare to FacebookShare to Pinterest
Labels: colours of the month, nature