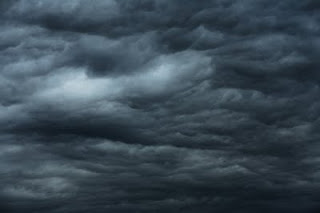 The sky sunk like a hot, wet blanket, smothering the day into darkness; the fields, trees and the hills beyond merged into one another like paint running on a wet canvas; but still it didn’t rain.

I was about half a mile from the house, fascinated as I always am at the changes wrought by the weather on the landscape. My T-shirt stuck to my back in the humidity and I felt sweat trickling under my hairline as I gazed towards the shadowy horizon, trying to make out the shapes of the low hills that populated it.

I leaned back against the stone wall, trying to soak up some coolness from the rough surface, but even the stones themselves seemed to radiate warmth as if in attempt to keep any coolness they contained to themselves.

It had been four days now. Four days of unremitting clammy heat. The whole of nature seemed to be holding its breath, waiting to be released in one great, gasping gush of cool air.

I pushed myself away from the wall with an effort and turned towards the gate to walk up the slight incline that led back to the lane. The lane ended at the house that had been my temporary home now for two months and I approached it, as always, with care, making sure everything was as it had been when I’d come out three hours ago.

But this time something was different. I moved to the hedge line and stopped, trying to work out what it was that had alerted me. The gate was shut as it should be. There was no sign of any car. The house rested in the turgid air, silent and watchful. But something was wrong. I took a couple of steps forward, still keeping close to the hedge, gaining some cover from the drooping branches. And there it was; movement caught briefly where there should have been none; and from inside the house.
Posted by Angie Willis at 15:44