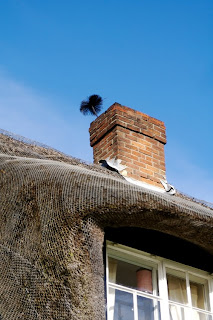 I’m sitting in my kitchen with the laptop, no broadband and no phone and my house is over-run by strange people and loud noises.

We’re having the chimney lined after all sorts of scare stories about the risk of chimney fires, the chance that the interior brick lining of the chimney’s going to crumble away etc. etc. A couple of months ago when we had the chimney swept I had a good look at the stuff that came down – huge chunks of black, vitreous stuff, the product of too many pine logs burned in the wood burner. It’s quite possible apparently for this stuff to catch fire in the chimney so I put a ban on use of the wood burner until we had it done – much to the disgust of my husband who was convinced it wasn’t really necessary but just a ploy of the chimney sweeping company to make a sale. But he does love his wood burner when the days get cold so eventually, with winter just over the horizon and the thought of another exciting delivery of logs, he gave in. How many people like stacking humungous amounts of logs tidily in the wood shed? Must be a guy thing!

It’s pretty well a whole day’s job and the room where the woodburner’s located is in the middle of the house so I get stuck either on the side where my study, bedroom and loo is, or in the kitchen. Accepting the fact that I’d be spending most of the day making cups of tea and coffee for the workmen, I decided to de-camp to the kitchen with my laptop.

The young guy is up the ladder on the roof, feeding a bloody great silver tube down the chimney while the boss of the operation’s in the sitting room yelling up the chimney to his mate and guiding the silver snake round the inevitable bends (why do they always put bends in chimneys?). While the young guy’s on the roof I get him to dig up the pine tree that’s decided to take root in the brickwork at the top of the chimney. My husband’s been threatening to do that for nearly a year now, since it was just a little tiny treelet, but the pitch of the roof and the fear of heights seemed to put him off. They tell me that if we’d left it there it would eventually have become a full-grown Scots pine growing out of the middle of our house (or what little would be left of it). Actually, thinking about it, it sounds quite fun.

While all this is going on the BT man turns up to try and sort out my broadband which has decided it doesn’t want to share a line with the telephone thank you very much and huffily switches itself off every time someone picks up the ‘phone. That and being abysmally slow (half a megabyte would you believe due to the distance we are from the exchange!) has been thoroughly tweeking my nerves of late.

Now I have broadband back and the phone works too. The chimney’s lined, the roof tree’s been removed and everything’s back where it oughta be. I’m off for a walk with Misty!!