There are resident herons on a nearby reservoir and each year they re-visit their nests to bring the next generation into the world. Unfortunately I was unable to get nearer and don't have the long camera lens required to get a better photo of this already large chick waiting for its mother to bring it food. 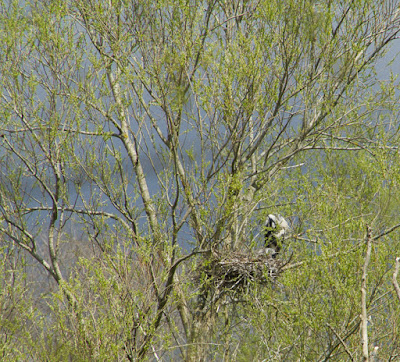 Heron is a sacred bird and was said to be the first bird to greet the sunrise and was able to predict storms. Three herons (or cranes) protect the entrances to Annwn, the Underworld. Heron is also associated with the Cailleach, the crone or hag, and as such is a bird of old age and longevity.

Herons dance in circles which mimic the movement of the sun.
Posted by Angie Willis at 17:46