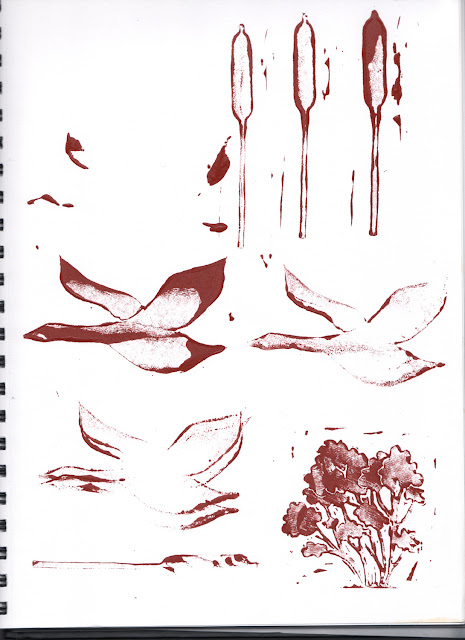 I've been playing around making my own stamps. The bullrush at the top and the goose were both cut on lino and the trees were cut on a soft, rubber material. I was really pleased with the goose but the shading was pure serendipity - it should have come out as a solid colour but for some reason the acrylic paint I used decided to do its own thing and make it look like a proper goose! The trees came out better than I thought they would as there was some quite fine cutting involved but the softer material was much easier to cut than the lino. I suspect it won't have such a long life as the lino though.

I'm beginning to think about trying to make a proper lino cutting on a block that I can make several prints from - say for Christmas cards. I think I need to practice for a while first on the small stuff and at the moment I have two fingers that I've cut quite deeply so I need to try to avoid that. What we suffer for our art!!

I'm getting excited about this which is a bad sign!
Posted by Angie Willis at 15:29