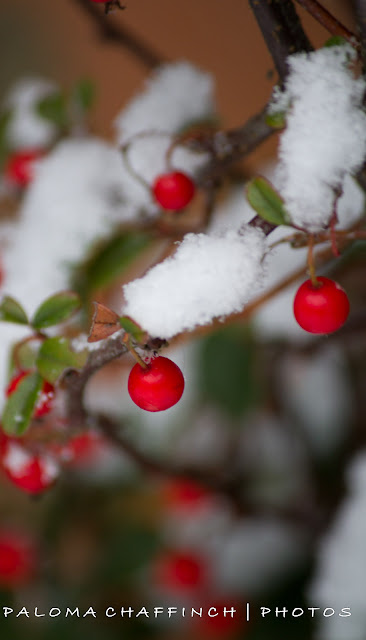 To be honest I'd rather have been out and about today getting some more street images, but the weather was awful and the roads treacherous and I shouldn't think there would have been many people on the streets of my local town to photograph.

So I walked round the garden to see if there was anything there and the only thing that looked reasonable were these lovely berries with their snow topping. Almost everything else was just weighed down with snow and pretty colourless.

I discovered that I could change the crop overlay tool in Lightroom to show the Golden Ratio among other crops. I do so love playing with new things; I cropped this image so the berry that I had focused on was on an intersection of the Golden ratio and I think it looks OK. It made the image a little long and thin but I don't think that matters too much. There is also a crop overlay for the Golden Spiral. Can't wait to try that one out. This is what happens when you're stuck indoors in the warm!
Posted by Angie Willis at 15:45