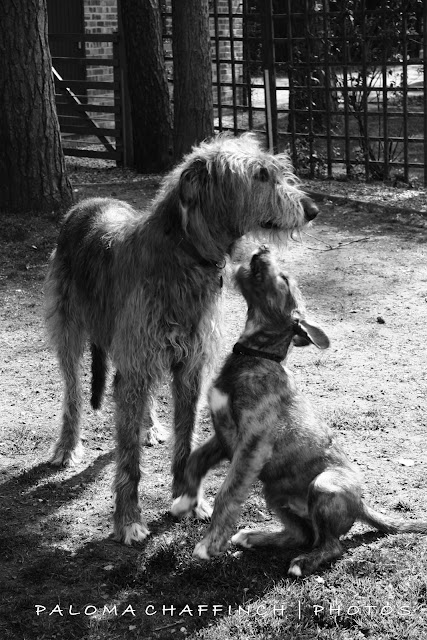 This is a photo from a few years ago. My older Wolfhound, Misty, is being attacked by the puppy, Alfie. He's only about three months old in this picture but however annoying he got Misty just put up with him and let him know that she was always the boss.

We don't have Alfie now - he developed a really bad habit of chasing anything on four legs and brought down a full-grown llama which lived not far away from us. He didn't hurt it but we felt it would only be a matter of time before he got into real trouble and we were worried that Misty, who wouldn't say boo to a goose, would start to run with him. The Irish Wolfhound Society re-homed him for us and he went to live in the Forest of Dean. No doubt he's having great fun chasing the wild boar that are abundant there! I was broken hearted at giving him up but out of the six Wolfhounds we've had he was the only one that displayed this type of temperament. He used to have his own blog called 'The Alfie Memorandum' which was great fun at the time.

Gosh, it's bringing tears to my eyes thinking of him. He was truly beautiful but unfortunately wayward.
Posted by Angie Willis at 18:10