The Best of Days and the Worst of Days 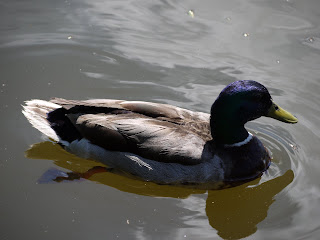 It's been the best of days and the worst of days!

At work this morning things were really getting on top of me. It's all so complicated now - there are so many things to think about and to remember and I'm really worried that my memory isn't up to it anymore. But if the adverts are to be believed, using it is the antidote to losing it, so you'd think my memory would be brilliant!

But this afternoon... now that's another matter entirely. It was absolutely lovely - the sky blue but with a cooling wind. I walked Misty at Gullidge and we both got pretty hot - although at the top of the field, alongside the paved track, the wind was quite fresh, at the bottom it disappeared completely so Misty was panting a bit. 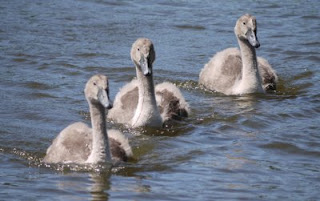 After I brought her home I walked down to the lake with my camera and a bag of stale bread. I went out onto one of the fishermen's platforms and threw some to the ducks and that started the stampede! I had crowds of ducks all around; every time I threw some bread in they all rushed towards it - how the manage not to collide and hurt themselves I have no idea. The swans started across at a more leisurely pace, line astern, following Mum. Dad brought up the rear looking rather above it all. I fed the cygnets by hand - their beaks didn't hurt me although they snatched at the bread. I offered some to Mum but she didn't take it and nor did she eat it when I threw it in the lake in front of her. I think she was happy to let her kids have it but just wanted to make sure I was nice to them. Dad stood off a way and watched - he didn't deign to eat anything when I threw it for him either. 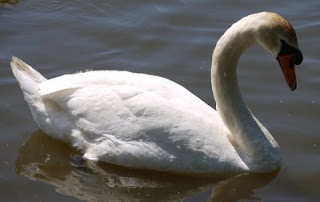 I took loads of photos of the ducks and the swans and cygnets:
Then I walked into the bottom of the field opposite the lake where the wild flowers are and took some photos of those too. It was very windy though so I played around with camera settings to see what worked best. I guessed a high ISO and about .1500 sec exposure. I'll download them and have a look.
Posted by Angie Willis at 17:29