New Family on the Lake 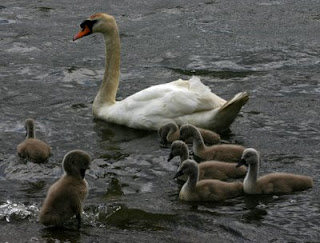 There's a new family on the lake near our house. The two swans that have inhabited the lake for years have just had their new batch of pale grey, fluffy cygnets. Seven this year which is the same as last year and seems to be about the average.

This is mum with all seven of her brood bobbing about on the waves caused by the high wind this afternoon. I've been meaning to take my camera down there ever since the beginning of this week when they were born but kept forgetting, so this is a week's growth. They get bigger almost by the day and I'll try to take a photo every now and then to record them growing up. 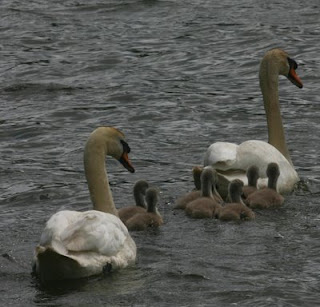 They stay close to their parents for most of the time they're growing. There's a particular grassy patch at one point beside the lake where they all regularly come ashore and groom themselves, resulting in a mass of feathers lying on the ground; from the long, curly white adult feathers to delicate little puffs of grey fluff from the cygnets.

Eventually, in late autumn, there will be a day when the youngsters just aren't there any more, chased off by their parents to go and find homes of their own whilst the amazing cycle starts all over again next spring.

This family is just part of the wildlife surrounding this beautiful lake. There are Canada Geese, Moorhens, Great Crested Grebes, Gannets, Grey Herons and Mallards. But the swans are the boss of the patch and have even been known to drown ducklings by holding them under water.

I walk by this lake every day of my life, usually early in the morning, with Misty and it's the most amazing thing to see the effect of the changing seasons. It's one of my Zen places.
Posted by Angie Willis at 15:06

Email ThisBlogThis!Share to TwitterShare to FacebookShare to Pinterest
Labels: the lake, wildlife