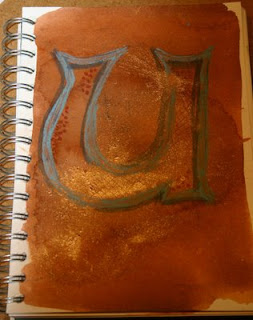 I had an idea that I would start a series of embroidery samples based on calligraphy. My inspiration comes from the illuminated manuscripts of such books as the Lindisfarne Gospels and the Book of Kells.
This is a very rough and experimental initial idea which needs much more working on. I love the idea of the gold splashes, as if the illustrator accidentally knocked over his gold paint on the page. I don't want to reproduce a stitched version of an illustrated letter, but a modern interpretation of the idea.
Very early days, but the seed has been sown.
Posted by Angie Willis at 17:34